Julian Shah-Tayler • 'All Good Soldiers' off 'The Torment Suite'

Julian Shah-Tayler a.k.a. 'The Singularity' presents 'All Good Soldiers', the first track on his new EP 'The Torment Suite', a collection of five new invigorating tracks with contributors including notable members of alternative rock royalty, including David J (Bauhaus, Love and Rockets) and MGT (Peter Murphy, Tricky, The Wonder Stuff). "This EP is about reaching out across the ether. Touching through music, through screens and everything we have while separated from the REAL. The reason it has such a lot of collaborators is because it's been such a disconnected time in the world, and I've sequestered in my studio with very little adult human touch," says Julian Shah-Tayler.

This release follows Shah-Taylers recent 'Evolution' and 'Devil Knows' single, with A-side 'Devil Knows (The Singularity version)' and B-side 'Devil Knows (Ruby Rock Version)', aptly named due to the involvement of the key artists involved in the Bauhaus Ruby celebration tour with Peter Murphy. The accompanying videos feature fairy-tale dominatrix Eva Strangelove and her day-to-day happenings in suburbia. "It feels right currently to reach out with the song 'All Good Soldiers' to the ones we love. It's about fighting for what we believe in against what seems often like insurmountable odds. I performed everything on this one. 'Beautiful World' is my paean to the senses and the beauty of the world we live in. MGT reworked this song radically on guitar and drums, and David J provided classic signature bass," says Julian Shah-Tayler. "Eyes Of Orion' is my remake of a song by Weird Wolves, featuring the excellent Ava Gore on vocals with Raf Colantonio co-writing and vocals. 'Loving The Alien' is my cover of the Bowie song and it's about my Love for THE alien manifest on earth. The "Beautiful World remix" is by one of my oldest friends, John Leach. He's a musical genius and always did magnificent work. I think he did the whole thing on an ipad!"

Leeds, UK-born and now LA-based, singer, writer and producer Julian Shah-Tayler makes electro rock new wave 'intellipop' for the 30th century. He is currently working with the legendary Robert Margouleff (Stevie Wonder, Devo) on his next LP, releasing tasters along the way. After completing his degree at York University, Julian moved to London as a singer-songwriter with classical training on piano and self taught on guitar. After several abortive record deals with music industry legend Alan McGee, he joined the hip electro clash outfit Whitey as co-writer/ guitarist, recording many of those songs in his nascent home studio. Julian later moved to L.A. to launch his own project The Singularity, and saw considerable success with TV and film licenses. He is known for his work on 'Plush', 'Riot on Redchurch Street' and Disney's 'Maleficent'.  He has won a Golden Trailer award, along with Daisy O'Dell, for his work with Lana Del Ray on the trailer for the latter film.

In addition to scoring music with O'Dell for the two-time Emmy winning 'Actors on Actors' TV show, his music has been performed for Robert De Niro, Bill Clinton and Martin Scorsese via the Unite for Humanity charity at the Oscars. Julian also recorded a unreleased album with Joaquin Phoenix and Antony Langdon (Spacehog), as well as directing Island Def Jam artist Kerli 4 for songs he co-wrote with Siobhan Fahey (Bananarama, Shakespear's Sister). His remix of Nico's 'These Days' with Daisy O'Dell was featured as KCRW’s “one to watch”. He also cofounded the 'Art Angeles' charity, teaching underprivileged kids music in Watts. When he is not writing and recording original material or producing other arists, Julian Shah-Tayler is selling out venues with his David Bowie tribute band 'The Band That Fell To Earth', his Depeche Mode tribute band 'Strangelove' and moonlighting as singer-keyboardist in The Cure tribute band 'The Cured' Released on November 13, 'The Torment Suite' is now available across digital outlets such as Apple Music, as well as streaming platforms like Spotify. It can also be obtained directly from the artist via Bandcamp.

“Massive... will make Julian a star” – Alan McGee (Creation Records) “Very Impressed” – David J (Bauhaus, Love and Rockets) "Sonically you get the more pop and rocked out versions, both impeccably produced and with shimmery vocals from our protagonist Shah-Tayler. Bravo" – The Spill Magazine
"Perfect nostalgia-infused pop - right up there with the best of Erasure and Depeche Mode with the melodic perfection of China Crisis and Ultravox" – The Big Takeover “Artistic perfection on his own terms” – Obscure Sound "Superb, danceable, invigorating, sexy. Welcome kickback to younger, more innocent, simpler days, when romance, movement & atmosphere connected kinetically" – The Record Stache “Intelligent, and skilled” – The Deli © Layout : Ils font l'Actu ...  FR 2017 - 2021
Transmitter : Shameless Promotion  ©  Photo by  Brian Ziff
Music is not a virus! Admittedly, it contaminates you with the melody, the lyrics, but it can be bought, discovered, hummed, tickles the hollow of your ear, is released on your lips ... Think of the artists, they illuminate your daily life and feed the memory of pretty refrains which will become memories.
Partager cet article 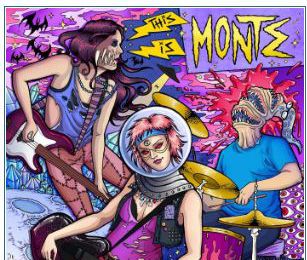