WORLD I Julian Shah-Tayler aka 'The Singularity' presents his new single 'Evolution', which also involves a collaboration with MGT (Tricky, The Mission UK, Peter Murphy, Ashton Nyte, The Wonder Stuff). This one is for those who have been through hard times in love and the need for new experiences.

Hailing from Leeds, England and now based in Los Angeles, singer, writer and producer Julian Shah-Tayler makes electro rock new wave 'intellipop' for the 30th century. This song was written, produced and performed by Julian and recorded in his TARDIS home studio in Los Angeles, with additional guitars by Mark Gemini Thwaite and Gene Micofsky.

"Evolution is about the difficult process of evolving towards loving kindness through the layers of love and loss in a society that cares nought about the human heart, and more about 'norms'. It is about holding on to the pure ideal of the heart despite the cynicism of the intellect," says Julian Shah-Tayler.

Having spent much time as a touring musician, Julian has experienced the pain of meeting and “breaking up with” people every night.

“Each human contains great beauty within, and it is impossible to disregard a connection however brief once made,” notes Shah-Tayler.

After completing a philosophy degree at York University, Julian moved to London as a singer-songwriter with classical training on piano and self taught on guitar. After several abortive record deals with music industry legend Alan McGee, he joined the hip electro clash outfit Whitey as co-writer/ guitarist, recording many of those songs in his nascent home studio.

After parting ways with his bandmates, Julian moved to L.A. to launch his own project The Singularity. There, he has had considerable success with TV and film licenses, known for his work on 'Plush', 'Riot on Redchurch Street' and Disney's 'Maleficent'.  He won a Golden Trailer award, along with Daisy O'Dell, for his work with Lana Del Ray on the trailer for the latter film.

In addition to scoring music with O'Dell for the two-time Emmy winning 'Actors on Actors' TV show, his music has been performed for Robert De Niro, Bill Clinton and Martin Scorsese via the Unite for Humanity charity at the Oscars.

Shah-Tayler is currently working with the legendary Robert Margouleff (Stevie Wonder, Devo) on his next album. We'll need to sit tight and wait that one out. In the meantime, 'Evolution' will be released on August 21 across digital outlets such as Apple Music and streaming platforms like Spotify.

“Massive... will make Julian a star” – Alan McGee (Creation Records) “Very Impressed” – David J (Bauhaus, Love and Rockets) "Perfect nostalgia-infused pop - right up there with the best of Erasure and Depeche Mode with the melodic perfection of China Crisis and Ultravox" – The Big Takeover “Artistic perfection on his own terms” – Obscure Sound “This music screams SEXY to me” – Lafamos “Intelligent, and skilled” – The Deli 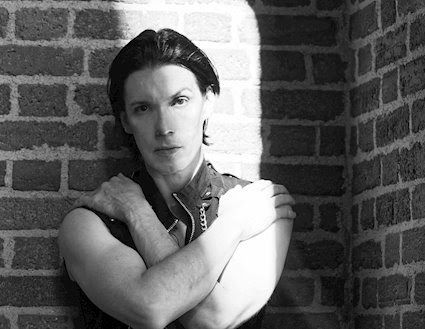 ©  Layout :  FRED Ils font l'Actu ...  FR  2017 -  2020  Transmitter : Shameless Promotion                 © Photo  Alex Tovar
Music is not a virus! Admittedly, it contaminates you with the melody, the lyrics, but it can be bought, discovered, hummed, tickles the hollow of your ear, is released on your lips ...  Think of the artists, they illuminate your daily life and feed the memory of pretty refrains which will become memories.
Partager cet article