With Jacknife now based in LA and Cathal based in London, the two traded ideas and music files over lockdown, hatching plans for a satirical, mischievous examination of Irish history and pop culture in their lifetimes, which they label ..”a corrosive nostalgia”. The result is their debut 'a hAon' (Number One) album. One of the most innovative bass players of his generation, here Jah Wobble transforms the disarmingly quiet and reflective original version, with its stark vocals and ghostly piano chords, into a deep-dub odyssey, his signature low-end bass runs anchoring crisp percussion and panoramic space-echo effects. "Even a relatively obscure musical life such as mine can fortunately bring pinch-yourself moments of proximity to greatness, and so it is with Jah Wobble's transformative contribution to this version of 'Falun Gong Dancer'. The song was already a high-point of the first Telefís album, but in this version it goes somewhere else entirely, thanks to JW's signature contribution," says Cathal Coughlan.

Jacknife Lee elucidates: "There are few bass players as iconic as Jah Wobble. I have studied and tried to copy his style for decades but never really got close. Brian from Dimple Discs suggested we ask him to get on 'Falun Gong Dancer', but I didn’t believe it would happen. We are still shocked that he agreed to collaborate with us and are excited for it to be heard” Jacknife Lee uses his extensive sonic palette to create an irresistible mix of cinematic instrumentals and electro-funk backdrops full of melodic, squelchy synths and thunderous bass-lines, often with a cheeky nod to electro-pop history. He has also created remixes for Radiohead, U2, Blur, Run-DMC, Pink, Future Sound of London, Christina Aguilera, TLC, Missy Elliott, Busta Rhymes, Eminem, The Raveonettes, Kraftwerk, New Order and Kasabian. Earlier, the duo released the original version of this song with its stark arrangement and stellar video by Matt Mahurin (Peter Gabriel, Tom Waits, U2, Sting, David Byrne, Joni Mitchell), who, as well as the following up the 'Mister Imperator' EP and 'We Need' EP.   As of December 7, the Jah Wobble mix of 'Falun Gong Dancer' can be obtained on Bandcamp and elsewhere digitally at https://orcd.co/telefisfalungongdancer. The 'a hAon' album will be released by London's Dimple Discs on February 11. CD and vinyl are available for pre-order at https://ffm.to/telefisahaon and the digital album at https://orcd.co/telefisahaon.

"A shimmering piece of pop. Laced in hypnotic energy, the song is steeped in Irish history" ~ Far Out Magazine “Blends cultural celebration, satire, the splintered identity of the Irish diaspora and historical introspection to electronic dance music” – PostPunk.com "This is actually a dancepop monster, channelling ‘Stop Making Sense’-era Talking Heads with acute contemporary social commentary" ~ Is This Music? "As stunning as the best of Talking Heads and LCD Soundsystem... watch them take the world by storm with this big sound and vision" ~ The Spill Magazine 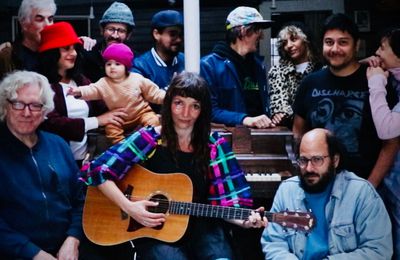