6TH CROWD - The Day is Over

CD - Electronic producer 6TH CROWD presents her new electro-wave single 'You're Not An Island', complete with video. This infectious vibing track is a welcome taste of her debut 'Avoid The Void' EP. The solo project of Dari Maksymova, she has a knack of luring us into her adrenaline-inducing musical world, where analogue and digital thrive together.

Earlier, 6TH CROWD released the singles 'The Day is Over' and 'Самозванцы' (Samozvantsiy)' to whet our appetite. Inspired by such artists as Modeselector, Siriusmo, Four Tet and Thomas P. Heckmann, her music is a most welcome addition to the electronic music landscape. All tracks are mixed and mastered by @plastmassa.community.

Written well before the dire COVID-19 situation, the new single carries even greater significance in our newfound world of social distancing, lockdown and self-monitored quarantine. The author has a message for friends and followers alike “We all go a little crazy here in a month of lockdown, huh? Huge thanks and all the credits to my friends for going crazy in the video and for being amazingly patient with me these days.”.

We get it – surely everybody gets it by now. Cabin fever is making us stir crazy, not to mention worried for our family, loved-ones and the future in general. We need human contact, personal connections in order to get through this.

“The lyrical part of it is exceptionally minimalistic. In fact, it's just John Donne's quote, "no man is an island entire of itself," and the phrase "you're not an island." The last one is repeated in Ukrainian, Portuguese, German, French, two types of Spanish, Chinese, and Hebrew. That's pretty much dance music, voices just give us the feeling that we're not alone. Even if you're here in your bedroom all alone, you should remember that there are thousands of people in their rooms across the world feeling just as lonely as you do. And that unites,” says Dari Maksymova.

“The song had been sitting in my hard drive for a year. And the description above was written in early February when Ukraine had no clue about the imminent pandemic.  I always write music for myself, to get something I need from it – courage, support, relief. But I had no idea how much will I need this one. If you feel scared, tired, and a bit lost – take my hand, we all together here.”

Dari Maksymova is an electronic producer and singer based in Kyiv, Ukraine. She is best known as frontwoman, synth and bass player of post-punk band On The Wane.

6TH CROWD combines grooves from rave dance floors, melancholic storytelling from 80's alt-rock and melodic pop vocals.   As a kid, Dari was obsessed with dance and dreamed of becoming a choreographer. It never happened but the inner connection between rhythm and body never disappeared. In 2018, she took a part in a dance and music program in Germany and that dance-obsessed kid woke up. Dari attended legendary dancefloors where Thomas P. Heckmann and Regis were playing and discovered a wonderful new world of polyrhythms and textures. By that time, synths and drum machines has already appeared in On The Wane's sound - her port of entry to creating electronic music. After the band disbanded, she took an intensive course in electronic music production, run by Kyiv's techno community Module Exchange - thus was born 6TH CROWD.

‘You‘re Not An Island’ will be released digitally on April 24 everywhere, including Apple Music, Spotify and directly from the artist via Bandcamp, where her first two singles are already available for download. The full 'Avoid The Void' EP will be released on May 15.

"Bringing to mind such artists as The Chemical Brothers, Agar Agar, Boy Harsher, and Four Tet. This is some fun fine dynamic electro pop... this track is perfect inspiration to break out the dance shoes and get some groove on" – Big Takeover Magazine "Electro wings flirting seriously with the techno boost... combines grooves from rave dance floors, melancholic storytelling from 80’s alternative rock scene, and melodic electro-pop vocals.... obviously needed musical escapade" – White Light / White Heat  "Echoes with the sort of soundscapes beloved of the likes of Chemical Brothers or perhaps Four Tet... blends a more clubland groove and euphoric rave sonics with the depth of alt-rock and the melodics of pop" – Dancing About Architecture
'Avoid The Void' EP will be released on May 15
We follow her ?
Facebook | Bandcamp | Instagram | Soundcloud | YouTube
Spotify | Apple Music | Deezer 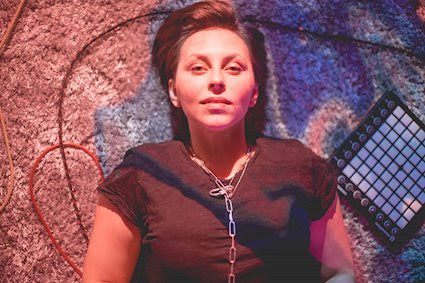