Nikavo is a musical union of producers Philip Winiger and Alexey Laduda, each quite prolific in is own right. The name of the project came from an aural transcription from Russian, meaning 'nobody' or 'not a single person'. As they say, two heads are better than one', especially when united by electronica and rooted in such a concept as future nostalgia. As such, Winiger and Laduda bring their own unique skill sets and experience to the studio. Originally from Switzerland, Winiger has a strong affection for the German electronic music scene and was formerly half of Cleopatra Records-signed industrial/ EBM outfit INHALT. Alexey comes from an entirely different background, having grown up in the rigid, yet highly creative, post-Soviet space, playing the guitar and singing. Both share a passion for dance music and analogue audio synthesis, ultimately manifesting themselves in Nikavo's ever experimental, yet accessible, sound.

"In 'Yummy Miami', the lyrics speak for themselves. It's about a direct experience that both of us had separately while working in the service industry and finally getting a time off, a break from the day-to-day grind and an opportunity to go somewhere where you feel happy," says Philip Winiger. "It's pretty transparent, there is no deeper meaning to that. An underlying desire for having fun and the excitement of getting there. We think most people can relate to that, everybody just wants to let loose and go nuts once in a while." In terms of their sound, esthetic and songmanship, Nikavo's songs are influenced by the work of Minilogue, Daft Punk, Kraftwerk, Trentemoeller, Telefon Tel Aviv, Jean-Michel Jarre, Victor Tsoi (KINO) and Morton Subotnik. Nikavo 'Yummy Miami' is out now, available digitally across key online stores and online streaming platforms, including Spotify and Apple Music.

"Nikavo’s music is elastic and catchy. This is fun, this is eclectic, this should be on your playlist… or several of them. This is the new San Francisco (via Switzerland and Russia) – ideal for the cosmopolitan musical mind, wherever you may be" –
Big Takeover Magazine 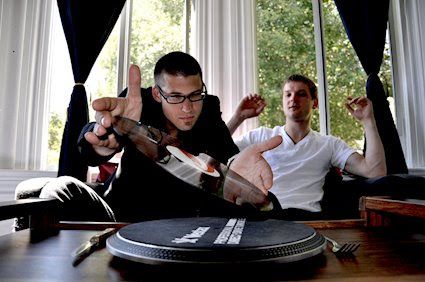 ©  Layout :  Ils font l'Actu ...  FR  2017 -  2020  / Transmitter : Shameless Promotion   © Andrew Shatnyy
Music is not a virus! Admittedly, it contaminates you with the melody, the lyrics, but it can be bought, discovered, hummed, tickles the hollow of your ear, is released on your lips ...  Think of the artists, they illuminate your daily life and feed the memory of pretty refrains which will become memories.
Partager cet article