-WORLD- London-based C86 legends Wolfhounds have announced their new album 'Electric Music', set for release on July 3 via A Turntable Friend Records. Ahead of this, they present lead single 'Can’t See the Light', a powerful track that opens fire on side one of the forthcoming record with captivating video by David Janes.

A spitball of melancholy fury, this is an explosive tune about how anger turns inward after the low expectations of a country’s myriad self-defined gatekeepers have crippled the ambitions of those who want change for the better. With a bass-heavy rush, 'Can't See The Light' builds desperately to a semi-tonal release of noise, sounding simultaneously claustrophobic and liberating.

"All tunnels eventually emerge into the sun (as David Janes’ accompanying paranoid and sick-a-delic video shows) but while you’re underground it can seem like darkness is perpetual and inevitable," says Callahan.

Always ahead of the times, The Wolfhounds have never nailed the spirit of now more succinctly and devastatingly than on this new single and other songs on the new album.

Originally formed as teenagers in 1984, The Wolfhounds released four critically acclaimed LPs before initially disbanding in 1990. By that time, they released music on the legendary and influential C86 cassette via NME, recorded three John Peel sessions for BBC Radio One, and toured the UK and Europe extensively as headliners and as support for My Bloody Valentine, The House of Love and The Wedding Present. The band’s acknowledged and audible influence stretches from Nirvana to the Manic Street Preachers, and all the way to Fontaines DC – but musically they remain ahead of all.

The band reformed in 2006 at the request of St Etienne’s Bob Stanley to celebrate 20 years since the release of C86, and inflicted a severe guitar noisefest on an unsuspecting indiepop crowd at London’s ICA. Since 2012, they have been recording and releasing new material, including 'Middle Aged Freaks' (2015) and 'Untied Kingdom or (How to Come to Terms With Your Culture)' (2017), repeatedly showing that they can still blow any act half their age offstage. In 2018, Wolfhounds released 'Hands in the Till - The complete John Peel sessions', a 12-track album released via A Turntable Friend Records.

The Wolfhounds are back and better than ever with their new 'Electric Music' LP – probably their greatest album yet.  The band has become truly (hyper-)active again, performing at several popfests (including Berlin and New York) and stand-up comedian Stewart Lee’s All Tomorrow’s Parties, as well as regular club dates in the UK and Europe. Stewart Lee also wrote the extensive sleevenotes for the record.

The band continue to be more relevant and adventurous than ever and, despite their indie roots, have more in common with the likes of Richard Dawson and Sleaford Mods than their old jangly peers. Electric Music grabs their home country’s woes by the horns and gives them the kicking they deserve!

As of May 15, ‘Can't See The Light’ will be available everywhere, including Apple Music, Spotify and Bandcamp. The full 'Electric Music' album will be released on July 3 on vinyl, CD and digitally.

“Fantastically caustic … always tougher and more canny than their peers” – Uncut “It makes for an incredibly thrilling journey” – Mojo “We could call this a reawakening, with the band sounding more relevant and compelling as ever. This is polished sonic firepower for the modern age” – Louder Than War “The ‘Hounds’ bark is frequently matched by their bite” – Record Collector “Since their reformation in 2005, they’ve continued to develop their sound without losing the fury that made their songs so memorable the first time round” – Sounds XP .

From the Forthcoming album July, 3 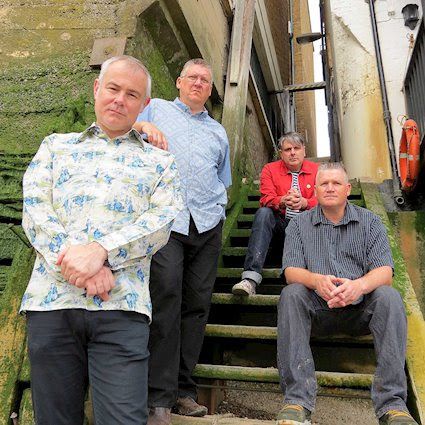 ©  Layout :  FRED  Ils Font L'Actu ...  FR  2017 -  2020  Transmitter : Shameless Promotion   © Photo Helen Golding
Music is not a virus! Admittedly, it contaminates you with the melody, the lyrics, but it can be bought, discovered, hummed, tickles the hollow of your ear, is released on your lips ... Think of the artists, they illuminate your daily life and feed the memory of pretty refrains which will become memories.
Partager cet article